​Image Description – A red brick wall with the words Funny Haha in bright green letters. There is an old fashioned microphone in a spotlight.

A course of 6 workshops for funny disabled women in comedy writing and performance, culminating in an informal cabaret night for an invited audience. NOW SOLD OUT
​
We are delighted to bring you a series of free online comedy writing and performance workshops curated by Vici Wreford-Sinnott, with 3 amazing and hilarious guest facilitators, supported by Little Cog and funded by Arts Council England.

Disabled funny women – it’s time to take the spotlight and grab hold of the mic. Let’s get together to create a safe space to write together and make each other laugh. We need it now more than ever. And what better way to embolden ourselves than the power of biting wit.

Each session will be fully accessible (book soon to let us know your access requirements), interactive and last for approximately 90 minutes.
​
Sometimes the sessions will be guided and facilitated with feedback, and sometimes we’ll lead each other with our favourite writing exercises, And, there’s a chance to prepare a short set for an informal cabaret and an invited audience. Performing isn’t compulsory if it’s the writing you’re more interested in.  But most of all this is about us!

Places are free but highly prized so please do only book if you know you can attend them all (or speak to us about this if you’ve any questions).
Please note that this is aimed at UK based disabled women and takes place in UK time zone.


We can’t wait to get going! See you there and if you have any queries contact us at info@littlecog.co.uk
Also – we know circumstances can change so please do let us know if you can no longer attend so that we can make the space available to someone else. Thank you.

Image description - Dolly Sen portrait. She is a woman of mixed heritage, has brown shoulder length hair, is wearing a black jumper and is showing colourful tattoos on her forearms. She is smiling.

Dolly Sen has a brain of ill-repute. Because of this she is a writer, artist, performer and filmmaker.  Since 2004 she has exhibited and performed internationally. Her films have also been shown worldwide. Her journey as an artist has taken her up a tree in Regents Park, to California’s Death Row, to the Barbican, Tower Bridge and the Royal Academy, Trafalgar Square, and up a ladder to screw a lightbulb into the sky. Dolly’s creativity aims to put normality over her lap and slap its naughty arse. More recently, she has sectioned the DWP and has art displayed in the Wellcome Collection’s ‘Being Human’ Exhibition.

She is a disabled, working class queer, interested in disability and the madness given to us by the world. She currently resides in Great Yarmouth in Norfolk. She/They. 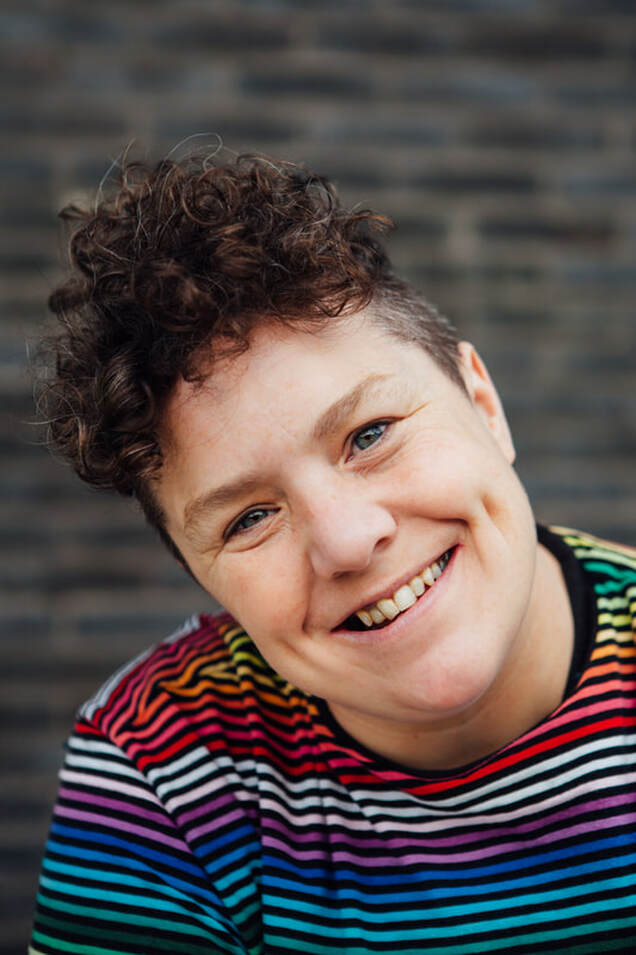 Credit: Ro Murphy.  Image Description - This is a close-up picture of Jess Thom – a white woman with curly brown hair in front of a grey brick wall on a sunny afternoon. Jess has her head to one side and is looking into the camera grinning broadly. She is wearing a striped rainbow t-shirt.

Writer, artist and part-time superhero, Jess Thom co-founded Touretteshero in 2010 as a creative response to her experience of living with Tourettes Syndrome.

Jess has written in the mainstream and disability press including The Guardian, The Observer and Disability Now. In 2012 she published Welcome to Biscuit Land – A Year In the Life of Touretteshero, with a foreword by Stephen Fry.

Jess is a regular performer at Glastonbury, the Edinburgh Fringe Festival, DaDaFest, Unlimited Festival and Shambala. She made Broadcast from Biscuit Land as part of On Stage: Live from Television Centre for BBC4 in 2015. In 2018 her one-hour film Me, My Mouth and I was broadcast on BBC2 and went on to be screened in the USA, Russia, Chile, Switzerland and Canada.

In 2016 Jess took her award-winning stage show Backstage in Biscuit Land on an extensive national and international tour including the USA and Australia. In the same year she received a Wellcome Engagement Fellowship, became an Arts Council England Change Maker and received an honorary degree from the University of Wolverhampton.

In 2017 Touretteshero hosted Adventures in Biscuit Land at Tate Modern as part of their Tate Exchange programme, and curated Brewing in the Basement at the Barbican Centre. She also débuted her critically acclaimed performance of Samuel Beckett’s short play Not I. In 2020 Jess took Not I to New York City as part of the Public Theater’s prestigious Under The Radar Festival where it received a glowing review in the New York Times.

In 2018 Jess took her stand-up show Stand Up, Sit Down, Roll Over to the USA and Europe, hosted Heroes of the Imagination at the Southbank’s Imagine Festival, and Brewing in Battersea at Battersea Arts Centre. The year ended with Hacks for the Future, a residential theatre project for disabled young creatives in the Highlands in association with National Theatre Scotland.

In 2019, Touretteshero received Elevate funding from Arts Council England, a programme which aims to strengthen the resilience of diverse arts organisations. Jess deepened her advocacy work and hosted several facilitated conversations around access for senior managers or organisations such as the Barbican and Shakespeare’s Globe.

During the 2020 Coronavirus lockdown, Jess devised and delivered Digital Heroes of the Imagination with the National Youth Theatre and created a Pandemic Postcard for the Harbourfront Theatre in Toronto.

Jess has spoken widely in the media about her life with Tourettes, including on Woman’s Hour, This Morning, and Russell Howard's Good News. She has given a TEDx talk at the Royal Albert Hall and features in the Annalisa is Awkward documentary on BBC Radio4.

Jess is a visual, performing, and participatory artist based in London. She graduated from The Royal College of Art in 2005. She campaigns for disability rights and social justice and is on a mission to change the world ‘one tic at a time.’ 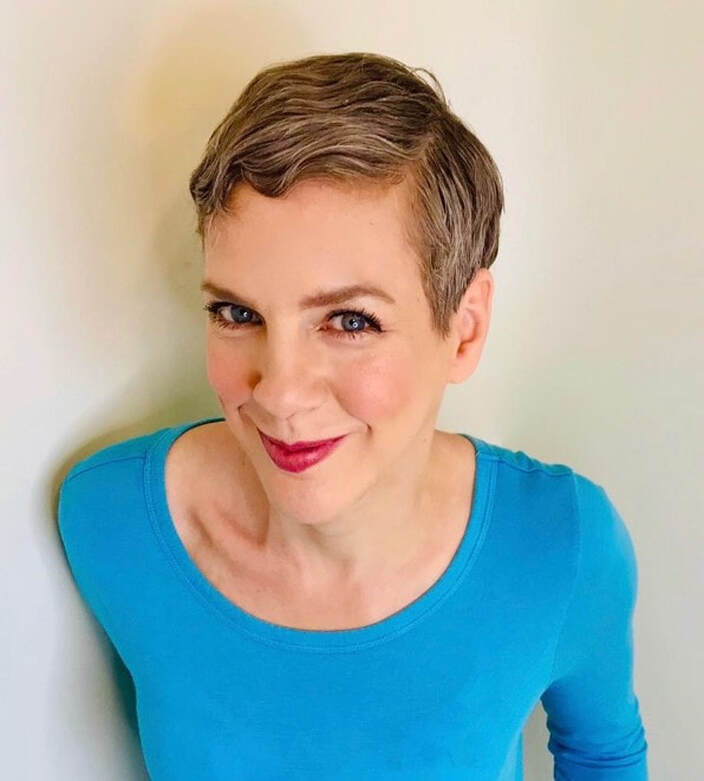 Image Description - Francesca Martinez is a young white woman with short fair hair and is wearing a bright blue top. She is smiling at the camera.
Francesca* is a comedian, writer, actress and speaker who has toured the globe with her  award-winning stand-up shows. She launched her comedy career in 2000 when she became the first  and only woman to win the Open Mic Award at the Edinburgh Fringe. She has performed in Australia,  Ireland, France, Sweden, South Africa, Canada, Singapore, Malaysia, in Hollywood, on Broadway, and  alongside Emma Thompson at the World Economic Forum in Davos, Switzerland.

From 2003 to 2008, Francesca toured her hit Edinburgh solo shows I'mperfect and In Deep  around the UK. From 2011 onwards, she toured her award-winning show What The *** Is Normal?! around the world, clocking up 140 dates. In 2016, she supported Frankie Boyle on his sell-out UK tour, and was commissioned to write a new comedy show Francesca Martinez’s Wobbly Manifesto for performance at museums around the UK.

Since starring in five series of BBC's Grange Hill in the 1990s, Francesca has made numerous  TV appearances including BBC2's Extras opposite Kate Winslet and Ricky Gervais, and BBC3's  Russell Howard’s Good News. On ITV, she headlined The Jonathan Ross Show and guested on The  Frank Skinner Show, Lorraine, Loose Women and This Morning. She appeared on Channel 5's The  Wright Stuff, two series of Channel 4's Very British Problems and guested on CBBC’s The Dumping  Ground. She opened Series 11 of BBC2’s Live at the Apollo and Sky One’s The Russell Howard Hour.

Francesca’s radio credits include several hugely popular appearances on Radio 4’s The News  Quiz alongside the late, great Jeremy Hardy, and writing and performing for The Verb and  Shakespeare’s Centenary on BBC Radio 3. In 2018, she wrote and starred in her first radio play How  We’re Loved for BBC Radio 4.

Francesca’s best-selling book, also called What The **** Is Normal?!, was published by  Penguin Random House in 2014. It garnered rave reviews and was nominated Best Book in the Chortle  Comedy Awards and runner-up in the Bread & Roses Book Award. She has contributed a chapter to  This Is How We Come Back Stronger, a new anthology of feminist writing (Feminist Press, & Other  Stories, March 2021). For TV, she has written the CBBC comedy-drama How I Found My Two Best  Friends, airing in April 2021. Her first stage play All of Us was commissioned by the National Theatre,j and Francesca will take the lead role when it opens at the Dorfman in 2022.

A regular commentator on TV and radio, Francesca delivers motivational and after-dinner  speeches across the globe. In 2005, she was nominated for the Motivator of the Year Award along with  Sir Bob Geldof. She was awarded Public Affairs Achiever of the Year 2013, nominated a Top Ten  Game Changer in BBC Radio 4's Woman's Hour Power List 2014, and Hero of the Year in the  European Diversity Awards. Francesca has recorded a popular Tedx talk, collected 100,000 signatures  for the WOW campaign leading to a historic debate in the House of Commons, and received a standing  ovation from the Cambridge Union. She has an Honorary Doctorate from the Open University “for  making Britain a more compassionate and fairer society”, and a second honorary doctorate from  Bradford University “for her contributions to equality, inclusive thought and social commentary”.

Francesca made global headlines in 2008 when she became the first Olympic Torch-Bearer to  pull out of the London relay in protest at China’s treatment of Tibet. In 2012, she made a splash when  she took on Michael Portillo live on BBC1’s This Week. She has since guested on Channel 4 News,  BBC2's Newsnight, BBC1’s Today’s Politics, and was voted most popular guest on BBC3's Free  Speech. Her 2019 debut on BBC1’s Question Time was described as the show’s “best-ever moment”  and went viral with 11 million views in the first week alone.

*Francesca has cerebral palsy but much prefers the word ‘wobbly’.