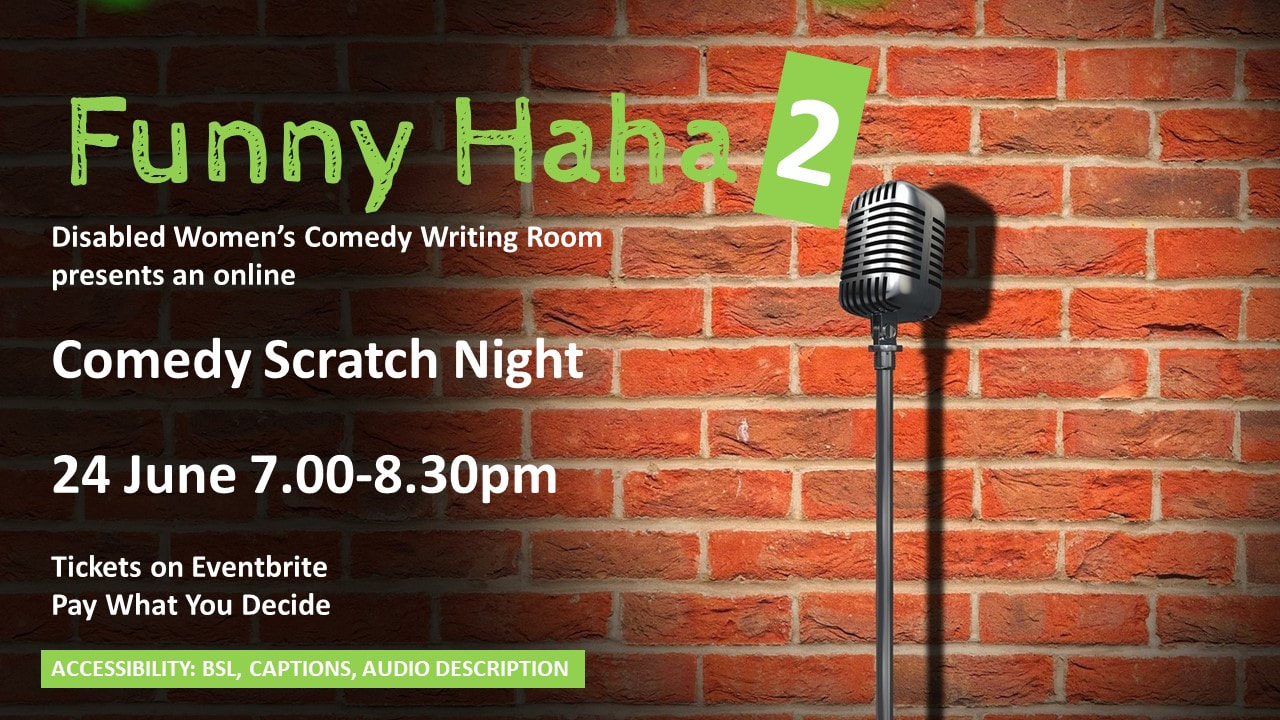 Funny Ha Ha 2
Funny Ha Ha 2 Comedy Scratch Night is an online live event for 8 disabled women to share some riotous comic adventures. Over six comedy writing sessions, facilitated by Vici Wreford-Sinnott and the incomparable JulieMc McNamara we created a comedy writing room where each of our writers has dedicated themselves to writing a short comic piece, in various forms, to present at an online sharing on 24 June 2022, 7.00pm.

We've been inspired by JulieMc and each other, and we’ve we howled with laughter at each others stories. We write together, talk about writing, performing and comedy, and generally continue to make each other laugh, even at the dark stuff, in fact, especially at the dark stuff. One thing’s for sure, we have all needed this space and we’re both excited and a little trepidacious about sharing our adventures with you.

Lynne Mcfarlane is reading her piece My Roots are Showing which is about growing up Northern and her mam, dad and her. Lynne is a superb storyteller and those stories are hilarious! Honor Flaherty has a superb Biccy-Wiki-Doodah collection to remind us of all our best biscuit associations, and may also tell us about dumping a narcissist. Karina Jones presents an extract from her one woman show in development, Blind Drunk. Vici Wreford-Sinnott is sharing some thoughts on people pleasing, perfectionism and not wearing yer bra in lockdown. JulieMc is talking about bursting yer own bubble - when the dream turns to dust and its bloomin' hilarious. Tanya Akrofi introduces us to a fabulous couple navigating sex, disability and care - superb storytelling. India Robertson is uproarious with Swipe Right Culture and Porcelain Delaney teaches us how not to create bush fires as we walk down the street.

Last year's first Funny Ha Ha project culminated in a hilarious live online sharing to an incredibly supportive audience, where people felt lifted up, including a representative from Channel Four.

Booking
Tickets can be booked on eventbrite by clicking here and are on a pay what you decide basis - which means you just pay what you like after the event.
​
Meet the Comedy Writers
Tanya Akrofi 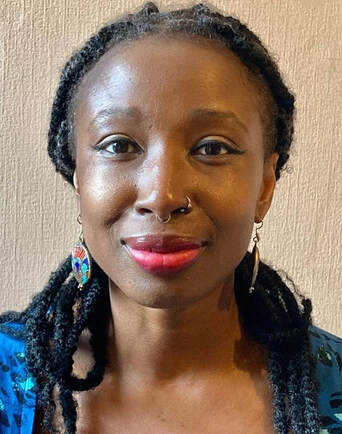 Tanya is a writer and oral storyteller who has an ongoing fascination with fairytales and folklore. As a workshop facilitator for children and adults, her ambition is to reconnect all of us, with the healing power of oral traditions. Her inspirations range from the Anansi tales of her Ghanaian childhood, to Angela Carter to the local tales of the Lincolnshire countryside. She is a South London Gyal living in Lincoln.
Pronouns - she/her/hers
Porcelain Delaney 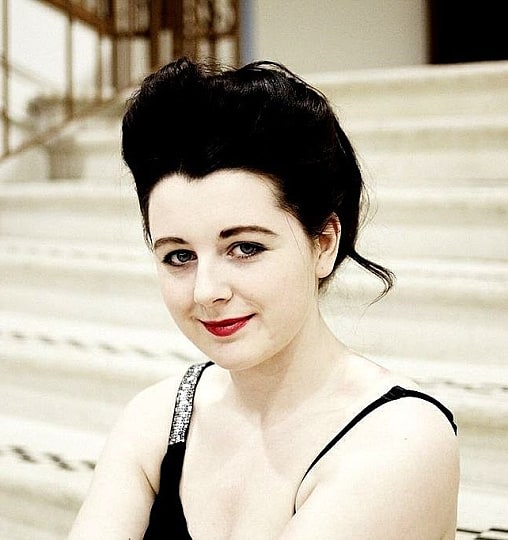 Porcelain Delaney is a Performer/ Writer based in Salford. Whilst working as a performing artist Porcelain grew frustrated at the lack of characters and stories that reflected her and those around her, So she started writing to share lesser told narratives. Porcelain has completed courses with: The Royal Conservatoire of Scotland, The Royal Central School of Speech and Drama and others. Her first play ‘Breeding Machine’ was longlisted by The Royal Court and awarded Arts Council England funding for development. Her second play ‘Nameless’ debuted in 2021 at DaDa Fest. Her Short story ‘Inspiring’ was longlisted by The Aurora prize for writing. She performed her monologue play ‘Reflection’ on BBC radio.
Honor Flaherty 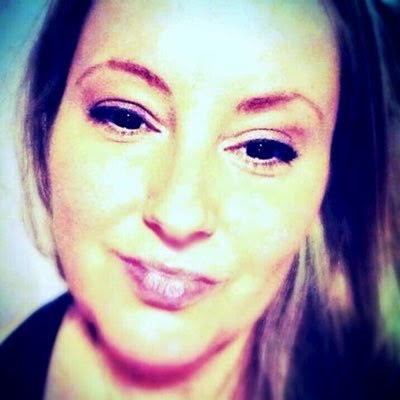 Honor Flaherty is an aspiring disabled writer from Leicestershire. After a successful career in professional theatre production, she decided it was time to take her writing dreams seriously, so she successfully completed a MA in TV Screenwriting. She has had some moderate successes with published short stories, and co-written a short film called Pop. She was also a co-writer on a feature film called 50 Kisses, which was produced by London Screenwriters Festival. More recently she has completed the Comedy Lab Sketch Writing course with Soho Theatre, as well an array of courses with Little Cog, DANC, Theatre 503 and The Lyric, Belfast. She is currently part of Leicester’s Curve Theatre playwriting scheme.
​
Karina Jones 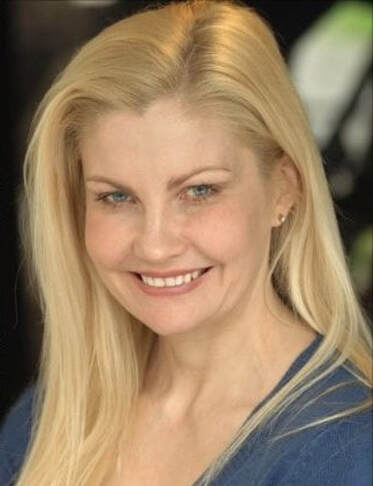 ​Karina Jones is a visually impaired actor, aerialist, belly dancer and vocal coach from Wales. She trained at Liverpool Hope University and The Royal Central School of Speech and Drama. She also works as a voice and accent coach, an audio description consultant and is a qualified NLP practitioner. Recent work includes performing in Macbeth at Leeds Playhouse, and Pride and Protest by Kaite O’Reilly for BBC Radio 4. Karina was invited to speak on audio description at the Riga International Circus Conference in Latvia.  She was audio description consultant for the Young Vic’s production of The Secretaries. Through Extant Theatre Company’s Directors and Writers Pathway courses, Karina is currently developing her own work due to be showcased soon. A wealth of performance experience Karina has worked with  a range of companies including Graeae Theatre Company, Original Theatre Company, Extraordinary Bodies and National Theatre Wales.
Lynne McFarlane 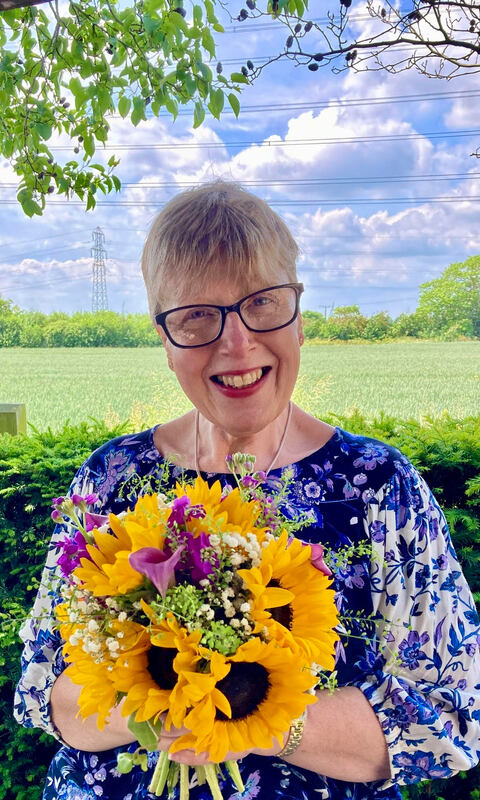 Lynne is an experienced writer, editor and proofreader who gained an MA in Creative Writing from The Open University. She has a long history in the publishing industry but now works in a freelance capacity as a writer. She will be reading her piece My Roots are Showing about growing up Northern, talking about her mam and dad and her.
JulieMc McNamara

​JulieMc is an outspoken advocate for Disability-led cultural revolution and an award-winning writer, theatre and documentary filmmaker. Her work is driven by social justice and actively seeks out unheard voices from the political periphery. She is co-founder of the Disability film Festival with Caglar Kimyoncu (1999 - 2007) and co-founder with Isobel Hawson of the Disability-led theatre company Vital Xposure, where she was Artistic Director until 2020. She is also a survivor of Long Covid and currently socializes as a human condom to model spatial integrity and the inclusion of Disabled people in social spaces.
Pronouns - ​She/ Her/ Sir
India Robertson 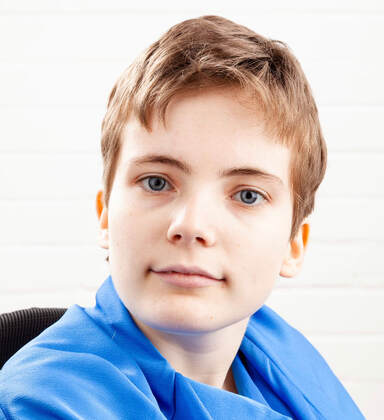 India Robertson is an artist and storyteller, using various techniques to entertain and sometimes inform. Her goal is to create innovative and comedic work with subtle political undertones to make the audience feel challenged, entertained, and refreshed.
Vici Wreford-Sinnott 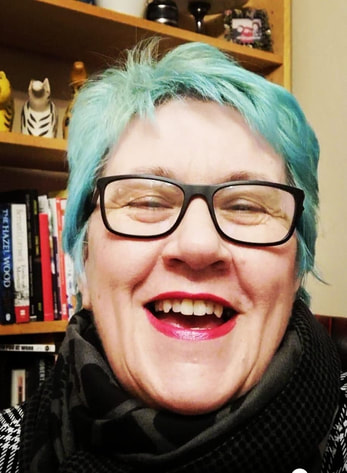 Vici was recently commissioned by the BBC to write and direct Hen Night, one of the first pieces of British broadcasting created by a disabled women led team and is still available to watch on BBC iPlayer.  She is passionate about creating new disabled protagonists and recent work includes the radio drama The UnSung with co-creators Mandy Colleran, Cheryl Martin, Caroline Parker and Jacqueline Phillips. She produced a number of lockdown productions including Siege and The Wrong Woman Discussions for Home Manchester, co-commissioned by ARC Stockton, and wrote, directed and also appears in Funny Peculiar starring Liz Carr (BBC Silent Witness), Mandy Colleran and Bea Webster. She was commissioned by Spare Tyre to create A Site of Suitable Scale  and continues to explore safe, accessible models of practice for the Covid-era for disabled practitioners. Vici has many theatre writing and directing credits and is currently under commission from Live Theatre for Three Acts of Love alongside writers Laura Lindow and Naomi Obeng. Her alter-ego, Raquelle Squelch, hosted the DIY Cabaret at ARC Stockton for Disconsortia, but she currently resting in some binbag dust at the back of the wardrobe.
Pronouns - she/her